Last night we had a friendly FS Caen game. My friend gave me a chance of fielding 512.sPzJgAbt from BaR and build his American tank list to counter it. The mission was No Retreat with Germans defending.

DISCLAIMER: before you start complaining about unfare lists, my friend knew I was about to bring Jagdtigers as I asked a permission to test 512.sPzJgAbt.

Germans started the game with Carius, Panthers, Panzergrenadiers and PzIV Hs on table. Carius had chosen the place for defence carefully and deployed his forces in good concealed positions.

Amis first tried to infiltrate their recon forward to try to blast on dug in panzergrenadiers but only managed to pin the platoon by recon. This didn't matter as being reluctant was not an issue and panzergrenadiers soon rallied.

After this it was all about Germans making their stormtrooper moves to stay hidden and Amies missing with 98% of their shooting.

With Carius leading his 2nd company, Germans took a heavy toll on Americans with no casualities in return. The game was all over by the end of turn 4 and my friend conceded the game. The Americans had lost all of their big tanks that they could have used to flank and kill 2 JTs, 2 Panthers and 3 Panzer IV tanks and my force was coming on with full force.

American priority Typhoon support was more of a speedbumb for Germans as those flyboys couldn't do a thing, always missing their target.

Finally received my price book "Bridge at Remagen" for Best Painted in Ace of Aces contest from Battlefront, big thanks for them!

This book is The Book for every player wanting to field a mix of Big Cats with Big Guns. And as you might have quessed from my previous post, I'm the kind of players to like and want them. From the first time I read that Carius, Jagdtigers and King Tigers were going to be in a same list I knew I just wanted to have this book ith all the sweetness.

Now that I've had my first look on the book I've come up with a list where I can have them all. It's not a competitive list in any way but you just can't have it all! ;)

This is 1650 points list using 2./512. sPzJgAbt. Nice thing with this is I only need one compulsory combat platoon. 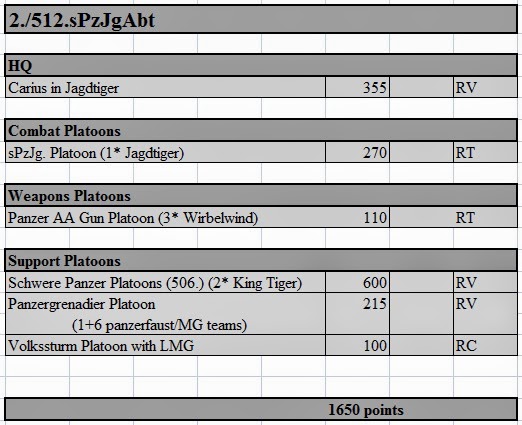 This gives me 5 platoons, 4 which counts when counting for reserves. From the list you already might quess which platoons would go to reserve, unless there is a damn big tankrush coming my way and I need to bring as much long range AT into bear as possible. Reluctant isn't that bad when you still are veteran or have high armor value.

Lately I've been thinking heavy, and I mean German heavy. I have a lot of planned lists of German Heavy Tanks that I'd like to run given enough heavy tanks (right now not nearly enough).

With only four platoons and such a limited numbers I'll be always outnumberet and outgunned. But what this list gives me is heavy anti-tank weapons (88mm KwK43/L71) with excellent armour with infantry support that can scare a s**t out of enemy armour trying to flank my Big Cats. Lastly there is my Coup de Main, 3 StuH42s ready to take out any gunteams or soften up dug in infantry before my pioniers or King Tigers make the assault.

I didn't take recon as four fearless veteran teams for 155 points is kind of a lot. Also no artillery as not enough points, but for that I've my StuH42s.

Lastly with points limited and after checking multiple times that I couldn't get anything else useful, I took Bergepanther. No obvious use for this but it nicely works as a bullet-magnet, and it has AA MG.


This all drops me few points short but I think I can manage that. All in all this list needs to be played in concert, each element supporting and protecting the other (an obvious thing!).

All ideas and comments are welcomed.