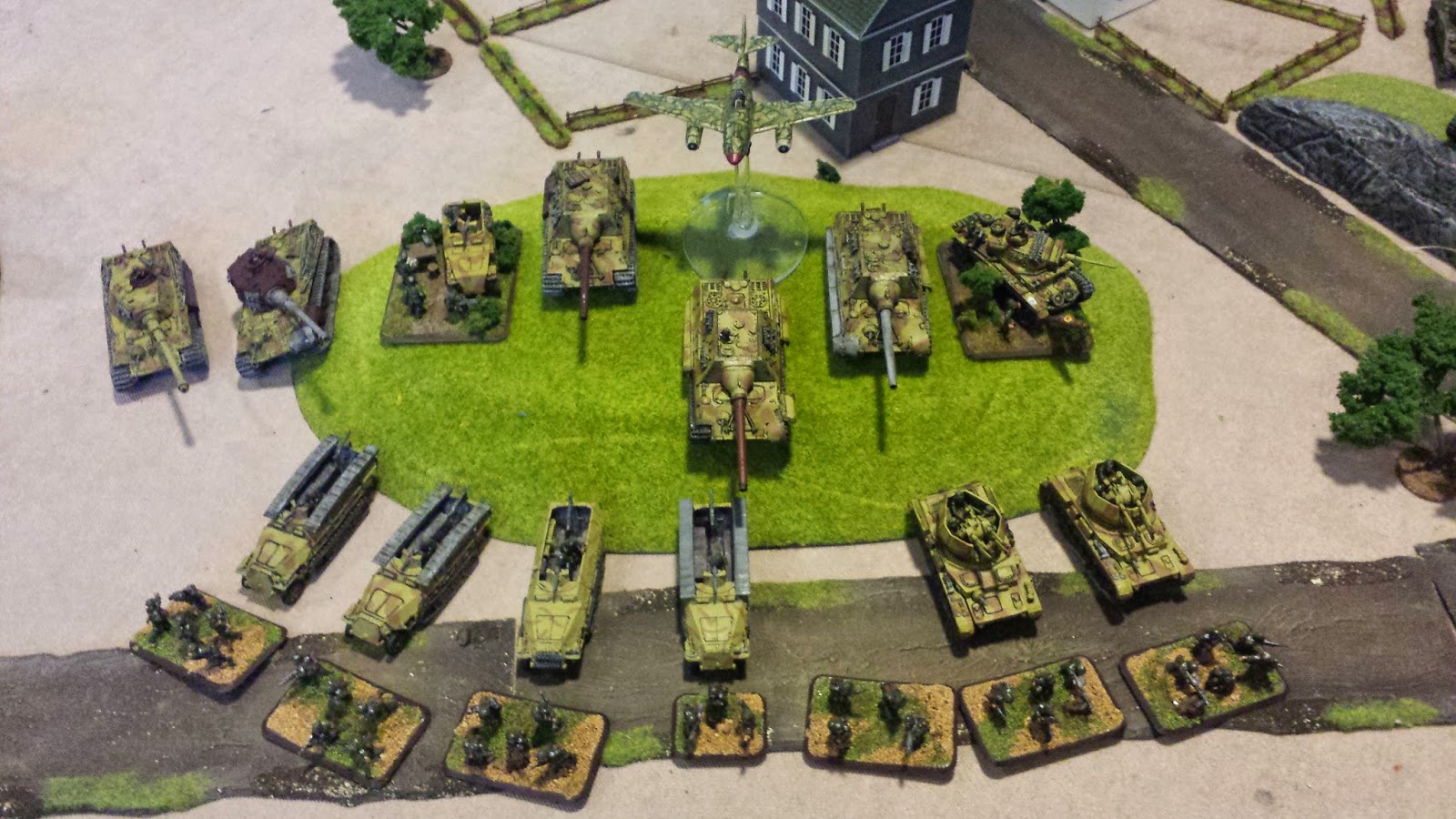 This force has the peak of motivation of any Jagdtiger armed forces so it goes without saying it also is the most expensive too. With whooping 395 points per Jagdtiger it also is the most expensive unit you can dream of having. This will also be your Achilles Heel as you wont get many Jagdtigers so you'll need to look else where for more fighting force. Luckily this company has it, with maximum of 4 Panzer IV Js and/or StuG G (late)s you'll be able to give your force some assaulting teeth and some more hulls. This though has a downside as these will come your opponents primary targets to knock out.

For AA you have two slots available, one as an organic AAA with either Wirbelwinds or Ostwinds. The second option is an allied platoon from Luftwaffe with either 88', 2cm FlaK38s,  2cm Flakvierling 38s or 3.7cm FlaK43s. All of the options are good in their own  way. The AAA options is rated as confident veteran so can be relied to stay standing a bit longer than their Luftwaffe counterparts who are rated reluctant trained and are of course allies and thus follow all appropriate rules.

With infantry you are spoiled with options and it all comes down to how you like to play your force. You can either go all half-tracked with two Panzergrenadier platoons, rated reluctant veterans, and an upgrade drilling H/Ts. Or you can take very good defensive infantry with Volksgrenadiers who have the option to take a panzerschreck. These come either as reluctant veterans or reluctant traineds, depending on your style and need. And finally we have the reluctant conscript Volkssturms with their tank terror panzerfausts. These guys can be an effective speed bump for enemy tanks but don't expect them to hold a flank on their own.

Next up we have the all cheerfull German artillery. Here you have all kinds of nice options from 7.5 FK40 (7.5 PaK40) to 150 sFH18s and 15cm to 30cm Nebelwerfers. Some of us might find big guns tempting but don't underestimate the smaller guns with their cheaper points. Volks artillery also comes either with 3 or 6 guns compared to normal German artillery platoons. You will also have two options for training, trained or veteran. For everyone the motivation is the same, reluctant, at this stage of the war.

As with the confident veteran Jagdtigers you'll be using minimum of 785 points into your Jagdtigers alone (2 Jagdtigers), this list suits better to higher points games.

You might want to then take a look at the Panzer IVs and StuG G (late)s as a cheap option for hulls.

Here I've made one 1900 points example list which excels both in assaulting and defending.

As the Jagdtigers are so expensive in this list I've taken just the minimum required, one in HQ and one in the compulsory platoon. It still is enough high AT and digging power.

I also took four Panzer IV Js to be my bodies and possible assault force. They are still good against medium tanks like T-34 or M4 Shermans. Just keep them out of fire as much as possible, and as with any German force Stormtrooping is your friend so do it right.

For weapons platoon, I chose 3 Ostwinds due to their range, AT and FP over Wirbelwinds higher RoF. If you want you can get a fourth Ostwind by dropping 3 nebelwerfers.

For first support choices I've taken two platoons of Panzergrenadiers as I think their H/Ts are great in defence and they give me the ability to use mounted assault. Also the drilling H/T upgrade is a great thing.

Lastly I've taken a battery of 6 nebelwerfers. They will give me smoke and the ability to pin with rerolls to misses which I think is great. 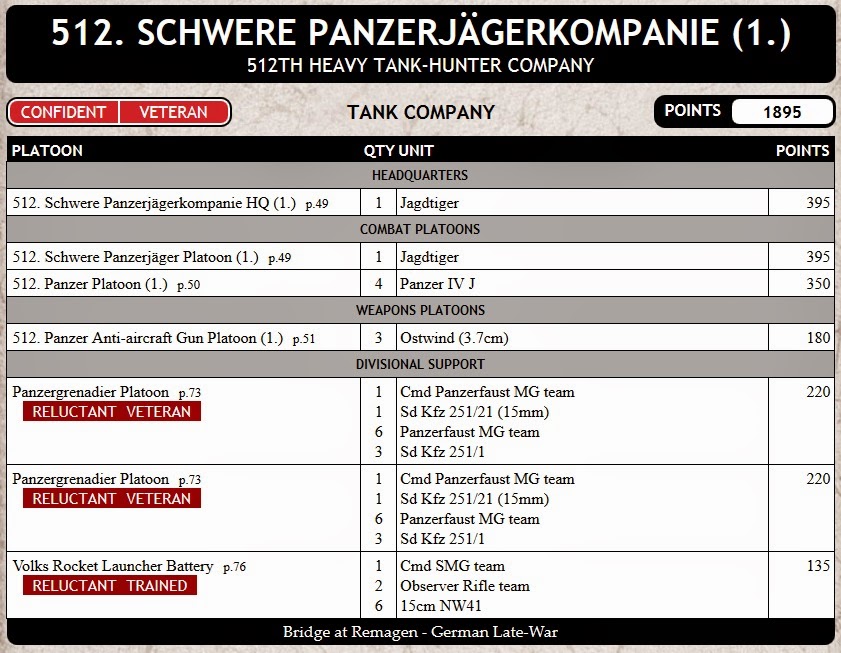 So there we have it, 1895 points and 6 platoons in total of 1./512.sPzJgAbt. This list is moderately good on both on assault and on defence. It has mobility, high end firepower, smoke, AA and staying power. One thing it lacks is recon but as with almost every German heavy tank list/tank destroyer list, you can't have it.

First of, you are able to defend thanks to Defenders of the Ruhr special rule and I suggest you use it, atleast for the first part of the match. In this stage your goal should be to take out any artillery and mobile AT units. This should last 2 or 3 turns.

Second stage is your preparation for assault. Move your Panzer IVs into position with your infantry and AAA. Jagdtigers should be used to snipe out any AT guns prior to assault. Use smoke to limit your enemys line of sight. Duration of this stage, 1 or 2 turns.

Last stage. Here you mop up any survivors. Use your Panzer IVs as a spearhead into assault followed by your mounted infantry. Why this way? Because the Panzer IVs can stand up the assault way better thanks to their armor and being confident instead of reluctant. Duration, remaider of the game.

Remember to concentrate your forces on one flank. It might be good idea to first leave the second Panzergrenadier platoon to protect your nebelwerfers but once the enemy starts to move his forces to aid the other flank, rush up and use smoke to cover your advance.

Don't be affraid to lose some forces. You can't avoid it.