Before we had Winter War tournament in the break of January-February, I got some time on taking a look on different lists for 2./512.sPzJgAbt. I pondered on having a company full of infantry and heavy tank killers. During the tournament my wanting for this kind of heavy hitting list grew but only with 3 Jagdtigers it wasn't going to pull through.

So I got to get myself a fourth Jagdtiger.

In the tournament I used my only JT with a commander pocking out to represent Carius but that left me with a problem, how to tell a part my 2iC and the lonely JT platoon which neither had a commander visible (I could tell which one was which by looking at the gun barrel colors). So with the fourth I set to work to make myself an individual Carius model. I bought a normal Battlefront JT model from a sale and a platoon of tank escorts to have something special to add to this model.

It was then time to go to work and follow my plan (which you can find here).

First up was the conversion work. I added AA MG and some blankets, bags and a helmet for personalization. I also removed some details for a more individual look and checked places for the tank escorts. Then it was time for the paintjob.

I used Vallejo Black as an undercoat for the whole model. This helps me to create shadowlines to the model. Next I mixed Beige Brown and White to get a light brown basecolor. I then used masking tape to create camouflage pattern I was happy with.

Camouflage was done with Pale Blue Grey painted in two or three light layers. After removing the masking tapes I corrected any errors free hand. As you can see I did add some more patterns to the left side of the hull just before highlights as i deemed the left side was too bare. I did this free hand.

I then moved on to apply highlights to the PBG areas that were higher than the main body of the hull (ventilation, hooks etc.). I used PBG mixed with White to get a lighter color and picked up details. I then used pure White as an extreme highlight.

Highlights for the rest of the tank were achieved using my mix of Beige Brown and White with more White added. This time I only picked up most highest of surfaces. The extreme highlights were done by adding even more White to the previous mix.

The bag, camonet, tools and plankets first got a coat of Chocolat Brown followed by a coat of Beige Brown. Gun, MG, spare tracks, jack and tracks were painted grey with a mix of Black and White (I was out of my usual color of grey). For the camonet I did blops with Beige Brown. Exhausts were painted with Hull Red, washed with Nuln Oil and the highlighted again with Hull Red. Measurement poles on the right side of the hull were first painted with Hull Red and the stripes were done with White.

I used various greens on camonet and Beige Brown in several layers with Nuln Oil in between. I washed every detail with Nuln Oil. Once this was done I started to highlight all the areas with appropriate colors. For the green plankets highlights I used Beide Brown mixed with Russian Uniform Green in about 1:2. Brown planket was done with Beige Brown as a mid tone tooned down with Nuln Oil and then highlighting again with Beige Brown. The tracks I left without highlights as it seemed best.

Now as the Jagdtiger was ready, it was time to start painting the tank escorts. I painted these part by part and I begun from the clothes. First I applied an even coat of Luftwaffe Cam. Green. Then I mixed in a very little amount of Pale Blue Grey and applied that leaving a tiny bit of previous color showing to the deeper parts. I repeated this twice more adding ever so little more PBG into the previous mix. Later, after some suggestions (thanks guys at Flames of War FB group), I washed the clothing with watered down Luftwaffe Cam. Green. Helmets were washed very carefully with watered down grey mix and then to more darker effect with Nuln Oil. I tried to left some green showing in the helmets to create an illusional effect, I'm not sure if this turned out ok.

As the painting of the camonet turned out to be a total fiasko, I asked some help from Flames of War FB group. From there I got very good advices to use roll bandage as a camonet after I've coloured it. For a tutorial on how to do camouflage nets I highly suggest you take a look at this tutotial. Thanks to these advices my Carius in his Jagdtiger is now finished. 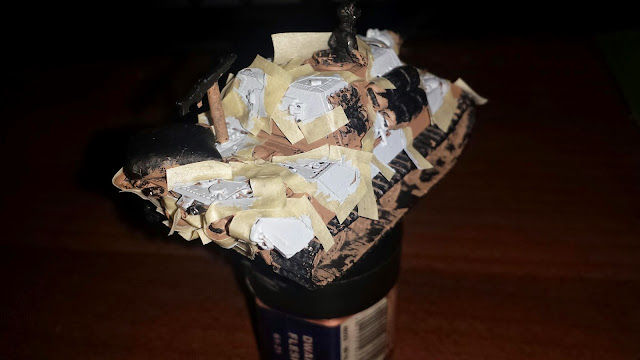 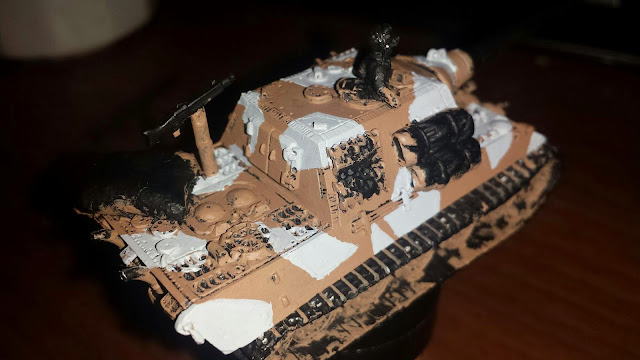 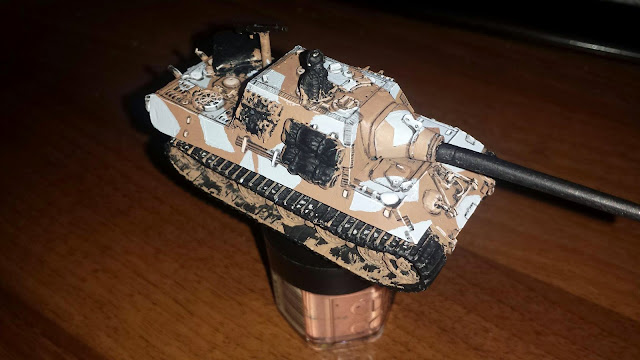 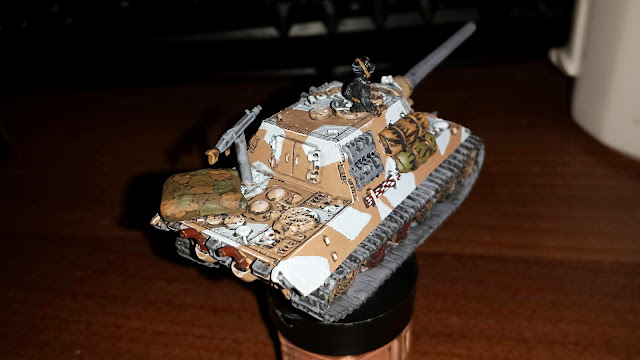 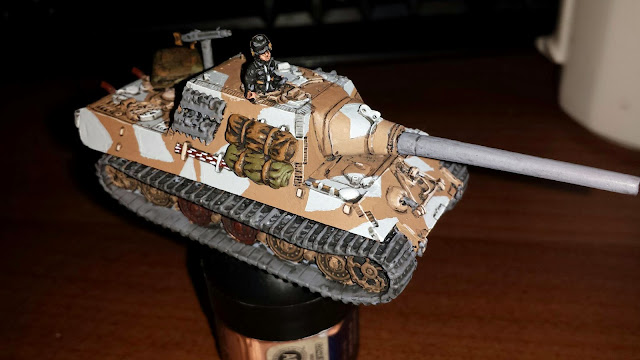 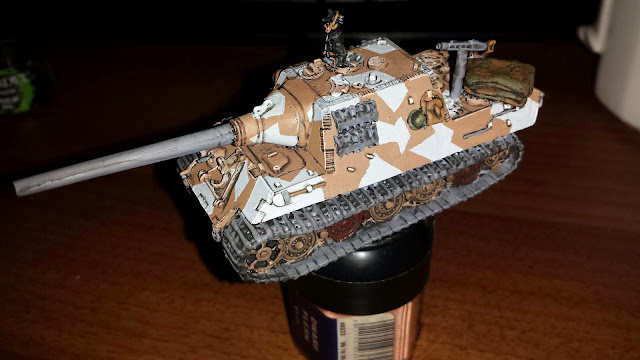 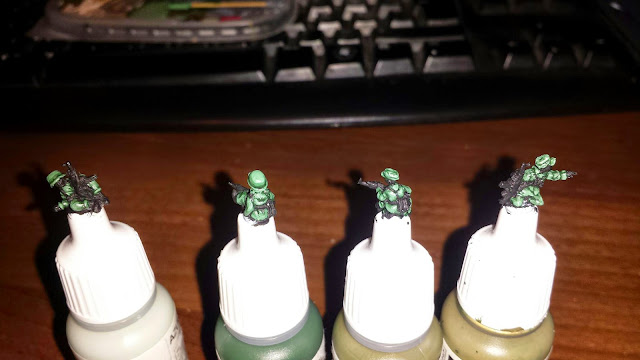 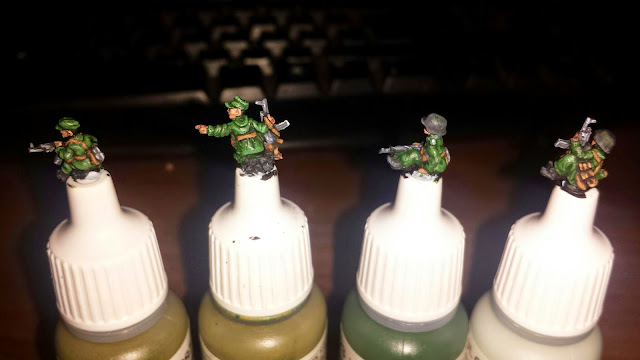 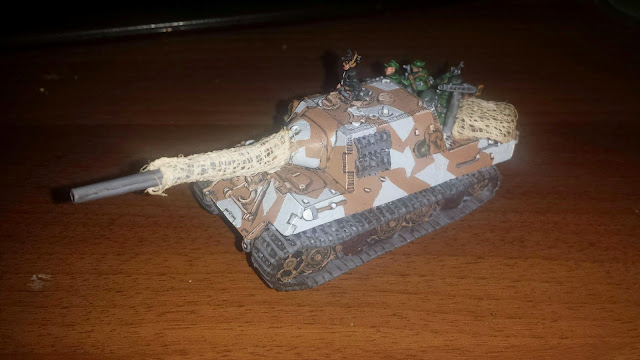 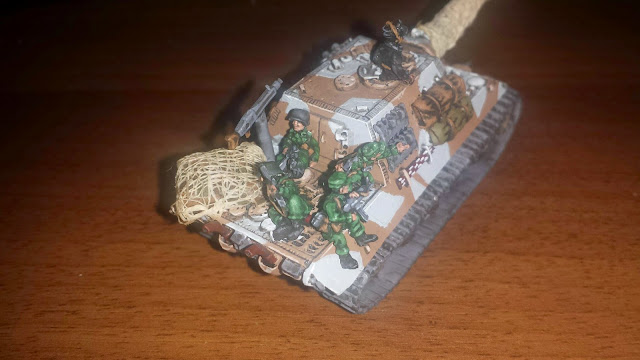 Well here you have it. I hope this has enlighten you on how I did this model. I liked to work with this model and with all the little conversions. Perhaps I have to do another conversion like this some day :)

I'd like to thank everyone who helped me with this project, eiher with advices or any other means. And I like to thank you dear readers for reading my blog!